Can you tell that I'm exited? 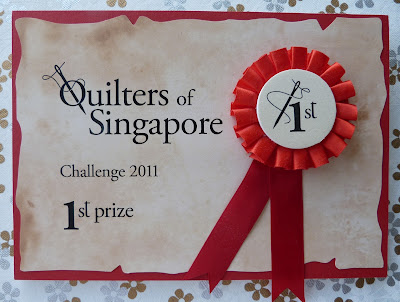 You might recall the quilt I've made for this year's Singapore Quilt Challenge. My Chinese Lantern received the most votes, can you believe it? I am tickled pink! 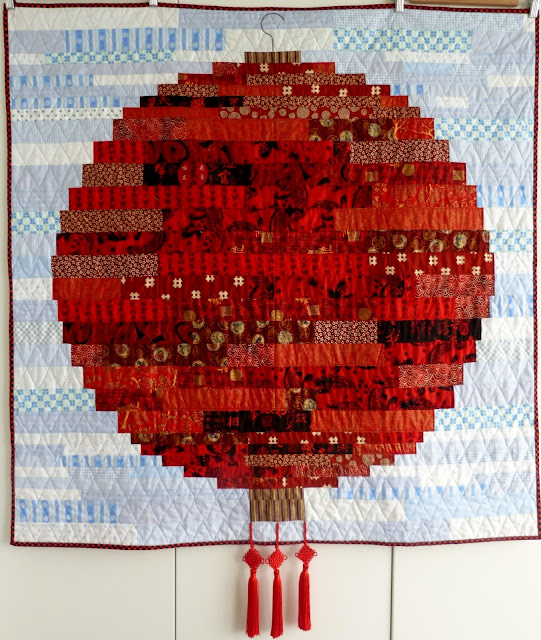 Look at the prizes; lots of Ruby goodness as well as coordinated solid fabric and Aurifil thread. But that's not all. I also received a couple of vouchers from a local quilt shop. How lucky am I??? 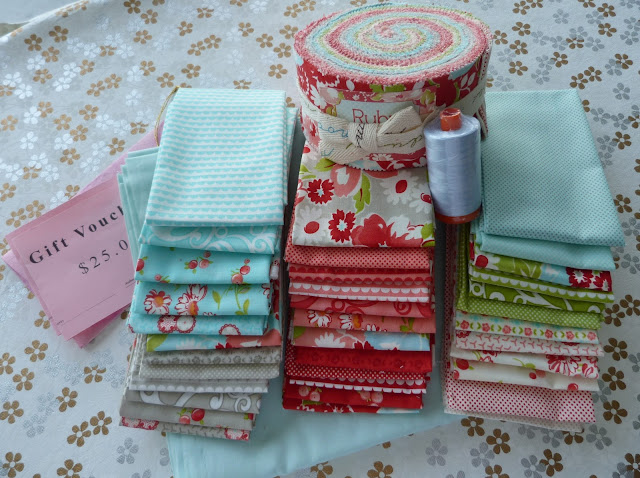 And here are some of the other entries! All very nice, don't you agree? 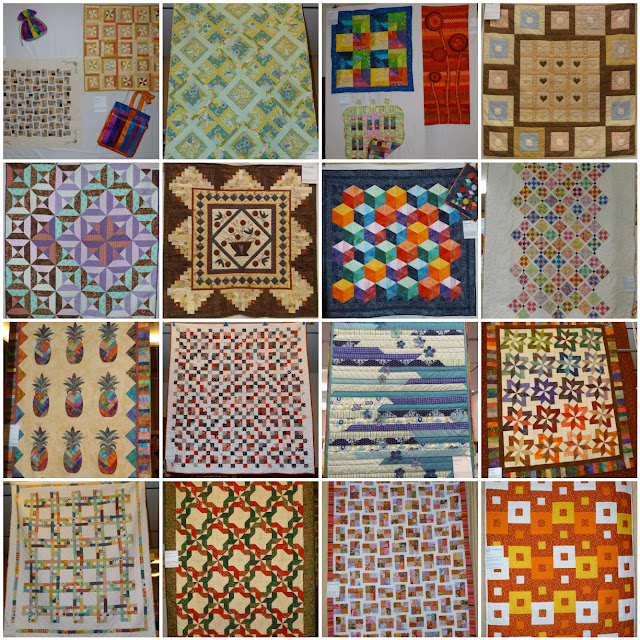 Now I'm going to play with my new fabrics and start planning what to do with them!

After a lovely week in China, we are home again. It was great to be back in Shanghai and to catch up with friends and go to the markets as well as having foot massages!
In Beijing we mostly spent time with DD and her young man! We got to see their new apartment as well as DD 's classroom; very new and high tech. When I went to school, we had a black board at the front of the classroom. My kids had white boards but now they apparently have smart boards, which - I had it explained to me - are interactive white boards. 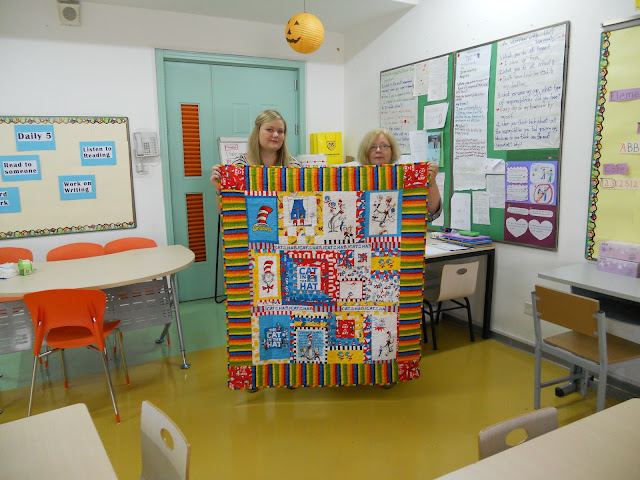 It was nice to see my Dr. Seuss quilt again 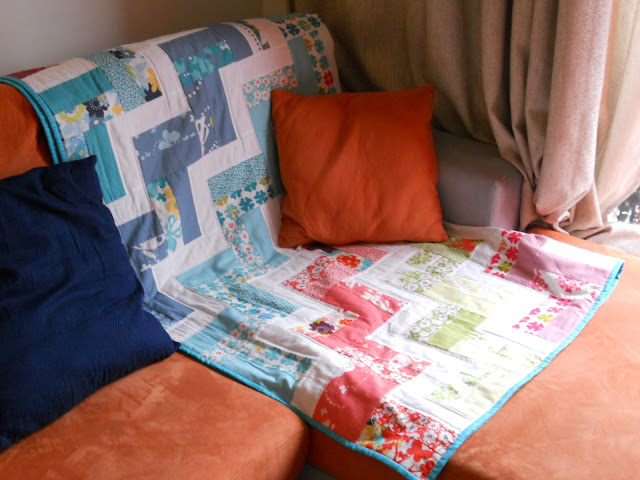 and DD was happy with the quilt I brought her. 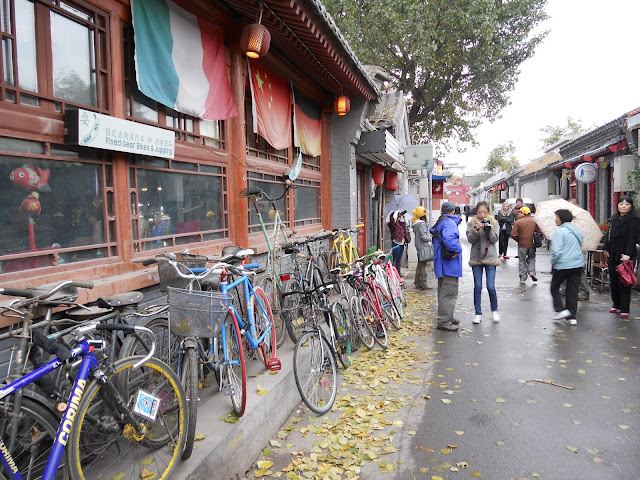 As we've been in Beijing several times, we didn't do any touristy things. But on Sunday we had a lovely breakfast and then a stroll through the Hutongs. Although it rained, it was a blessed relieve as finally the air was "breathable" again after three days of very heavy pollution. 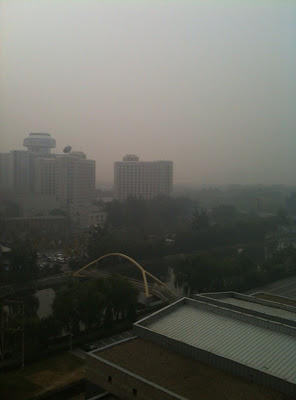 Just to give you an idea of how bad the pollution was. Take a look at these photos. This one I took from the hotel window when we arrived 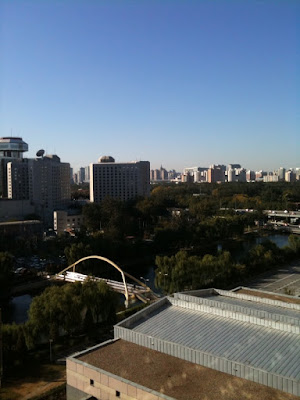 and this one - as luck would have it - on our last day. It's mid morning in both pictures.


It seems "the kids" have settled very well in Beijing. In any case they do eat like the "locals"!! 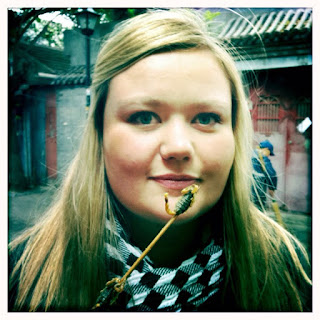 How about a little scorpion for a snack? Not for me, thank you very much,  although they tried very hard to convince me to try one. Apparently they taste like potato chips. Then why not eat potato chips, I ask you?
I hope your week is going well too.
Vreni x
Posted by Oops-Lah at 05:15 14 comments:

Just in the nick of time

We're going to China tomorrow; first to Shanghai and then on to Beijing to see our daughter (and her young man). Initially I was going to bring her this quilt, it only needed the binding put on. 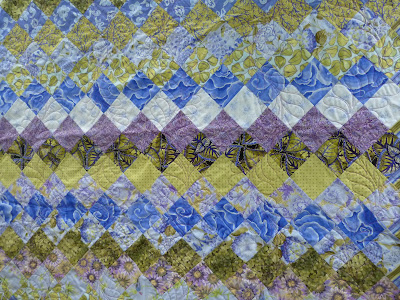 But after seeing the orange sofa in their new apartment in a photo she sent me, I had to rethink, and fast! I decided to give her the quilt which was intended for my MIL for Christmas instead. I can sort out what to give MIL later on. That left me with exactly two days for sandwiching, quilting and binding the quilt. 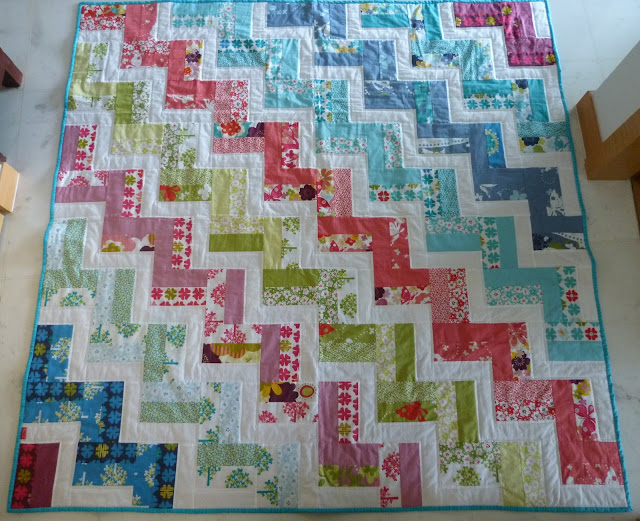 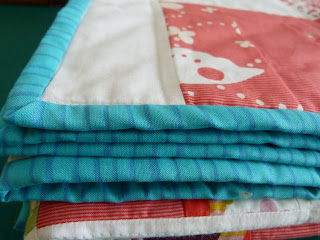 With time being scarce I stitched the binding by machine to the back. I usually do that by hand as I hadn't had much success on earlier attempts. But using the blindstitch foot really helped and I only needed to stop and go back because the stitching didn't catch the binding on the back a couple of times. I will need a bit more practice, but I will definitely do this again. 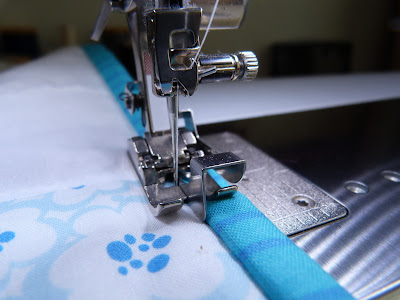 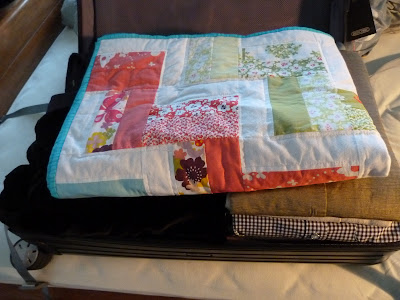 All ready to go. Can't wait!

I spent a very enjoyable week with a lovely friend who came up for a visit from Sydney, Australia. As she is a quilter too,  there was of course much talk about quilts, fabric, quilting books, patterns etc. She brought me a lovely little kit to make a "Thirties" pin cushion. We decided to make one each and had a cosy day at home stitching. 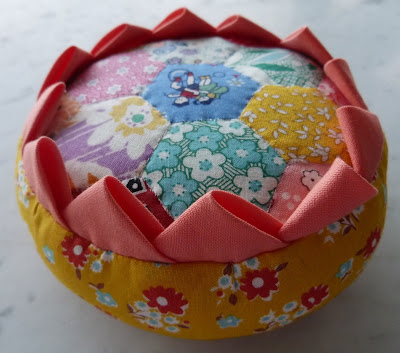 This is my pin cushion, all stitched by hand I might add, 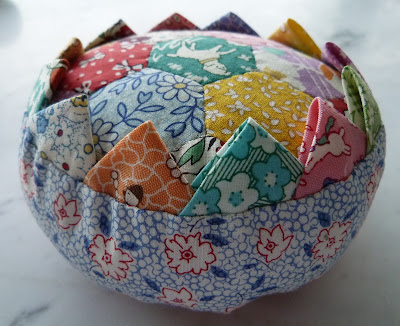 and this is the one my friend made! 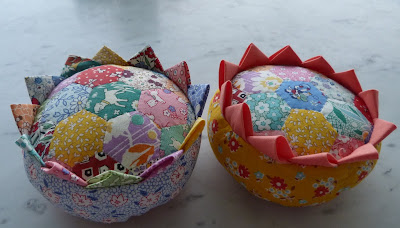 Here they are together; aren't they just lovely? 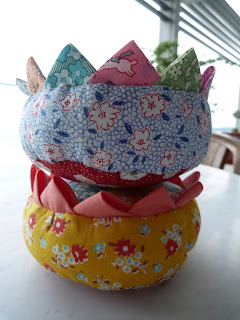 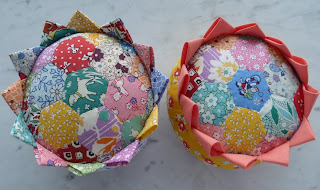 I'm determinant to reduce my stash; mostly so I can buy more fabric as there are so many lovely new lines on the market.

This quilts top is made with one jelly roll (Just Wing It by Moda) plus about 2 yards of white fabric. Although I have a few in my possession, it's the first time I've used a jelly roll as so far I just couldn't make myself open and unroll one. But I must say it was a joy to work with and it all came together easily. 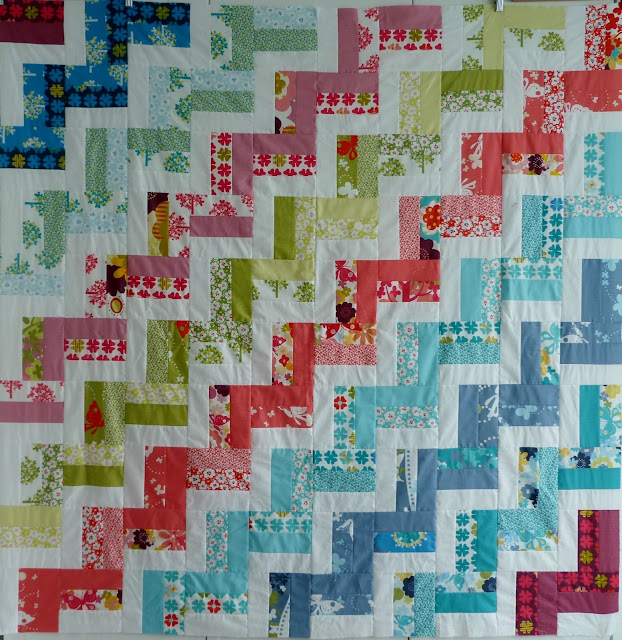 For this quilt I've cut the strips myself. A few years ago I was very much into the shabby chic look and still have plenty of those fabrics left. I think it will go well with my mum's decor in her house. As both quilts are for Christmas presents, I better get going with quilting them. 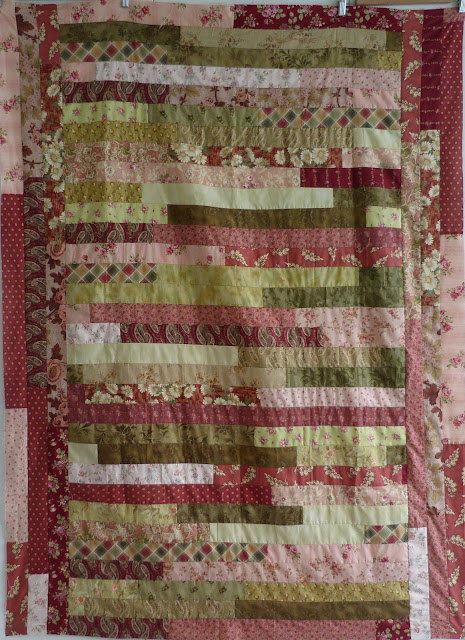 Have you seen the free Block of the Month Jackie from Canton Village Quilt Works is organizing? If not, take a look here. 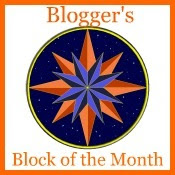 In my quest to reduce my stash I am playing along. Here's my first block. Now I can't wait for next  month's pattern. 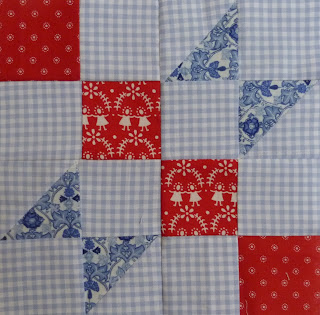 Thanks for stopping by.
Vreni
Posted by Oops-Lah at 09:05 17 comments:

Welcome to my world of quilting, boxmaking, crafting and life in general! 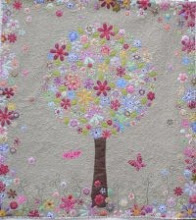 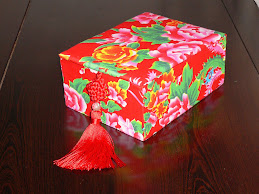 Oops-Lah
Basel, Switzerland
After living abroad for almost 30 years we have recently moved back to our native Switzerland. During our years in Australia, Taiwan, Indonesia, China and Singapore quilting and crafting have been a "life line" as it has given me the opportunity to connect with like minded women and I have made a lot of lasting friendships with people from all around the world.